“I can’t draw a straight line.” – I’m sure there is a good chance you may have heard someone make this statement at one time or another.

When I hear someone say this, it usually means it is code for – “I am not creative enough to do thing (x), or thing (y).” Basically, it is just a way to down play their creative abilities.

I personally have always believed that a big part of what separates human beings intellectually from most mammals is our creativity. Creativity and inventiveness is simply problem solving with a potential goal in mind.

A large part of the creative process is trust in your judgment and going with it. 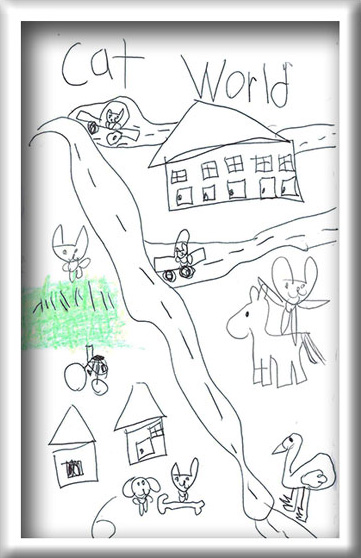 This is about getting past the insecurities of what others may think… having confidence in what you have done… not whether others deem it good or bad.

Vulnerability or being exposed to criticism is one of the hardest emotions to get past when creating art or doing something creative.

If you’re going to say something like – “I can’t draw a straight line”, or “I don’t know what color I want my curtains to be.” What you’re really saying is, “If I don’t do it, then I can’t be blamed if others think it is bad.” But, where does this thinking stem from?

This is where too much knowledge can be a bad thing. Yes, academic knowledge and learning about the world around us is a good thing… but it can also put a straight-jacket on creativity.

It starts in childhood

I see it first hand with my daughter and other children. My daughter, who is almost seven years old, has always enjoyed doing creative things – coloring, drawing, painting, and just making things from her imagination. This is not too unusual as most kids enjoy doing these things.

What I have started to notice is that as she has become more educated about the world around her; she is becoming more concerned with whether her creative choices are right or wrong in the eyes of the world.

I see her becoming frustrated. She isn’t frustrated by, let’s say, drawing a cat. She has drawn hundreds of cats in her own way… but she is frustrated with the idea that her cats aren’t drawn technically correct.

She is only seven years old. I am amazed by how quickly her innocent and unencumbered creativity is becoming more constraint.

At their worst, the constraints from what is perceived as right or wrong quickly become – “I can’t.”

Basically, kids start thinking to themselves, “If I don’t do it, or try to do it, I can’t be accused of being wrong – which will make me right by default – so there.”

This is the ultimate passive aggressive attitude, and the killer of creativity… and many of us take this attitude into adulthood.

Instead of saying, “I can’t draw a straight line.”

The better cop-out statement would be, “Because of the potentially judgmental eyes of society, I’ve stopped trying to draw a straight line.”

” I am enough of an artist to draw freely upon my imagination. Imagination is more important than knowledge. Knowledge is limited. Imagination encircles the world.” -Albert Einstein